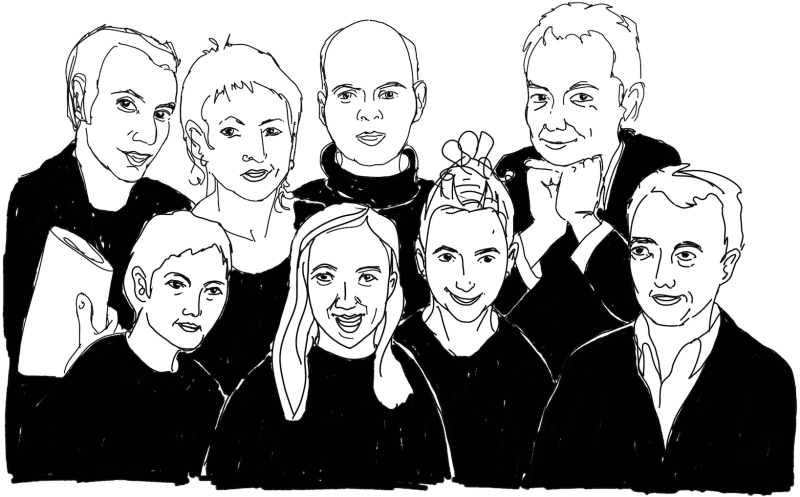 The German Short Film Association was founded 20 years ago. Astrid Kühl, founding and former board member, looks back at the beginnings, the difficulties and the players.

17.01.2022 - Oh, a mail from Franziska Kache/AG Kurzfilm. It's about the 20th anniversary of the association I founded together with many others in 2002. I have a feeling that I am expected to bake a birthday cake. I don't open the mail. I'd rather not, it smells like work, being creative, reminding me of times long past. After all, I'm definitely almost out of the short film business since 2008.

After that: Again and again the thought of this mail pops into my head. On Jan. 30, I open it and continue to ignore it. Maybe they just forget about me. They are annoyed, but do not want to run after me in any case.

14.02.2022, 14.09 - A WhatsApp message from Franziska. Damn, it's serious, I can't squirm out of it, have to squeeze something halfway informative, entertaining out of my brain.

15.48 - I answer, apologize, everything is already so far away, mea culpa, mea culpa, and ask for a call back when it fits.

16.02.2022 - I finally talk to Franziska on the phone for almost half an hour. We talk mainly about how and why the short film association was founded.

03/07/2022 - I receive material from the founding time of the association by mail. Ignore the mail, hope the deadline passes and my contribution is unnecessary.

03/15/2022 - A mail from Franziska asking me how to proceed with my (video) statement. Crap, my plan doesn't work out. I postpone the answer to the next day.

21.03.2022 - The day passes, I try to distract myself with housework and gardening. Know how annoying it is not to get an answer etc. etc.

In my head already formulated 1,000 introductory words, all forgotten again, although a few funny ideas were there. I could tell an anecdote, was a suggestion, but I can think of almost nothing or only too personal stuff. Maybe a dream about Michael Schmidt-Ospach (former managing director of the Filmstiftung NRW), lying on the floor in a romper suit and exclaiming over and over again: No marks (2002!) for short film, no marks for short film...).

I don't get anything done, think about asking for a postponement again, discard the idea, don't get in touch and postpone the matter worriedly to the next day.

Alright: The demand for an adequate representation for German short film abroad was known to me since I started working for the Short Film Festival Hamburg and the Short Film Agency Hamburg in 1993. There Markus Schaefer and his team had come up with the idea of doing this work, because almost the entire year's production of German short films was submitted and screened for the festival, and there was an existing infrastructure in the form of a video archive and an extensive database, as well as the collective memory of the staff. But the Short Film Festival Oberhausen, then under the direction of Angela Haardt, also had great interest and the appropriate initial conditions to take on this work. So there was a conflict, the resolution of which was not made any easier by the very different interests of the various people working with and for short films. It quickly became clear: an independent association had to be founded that would unite all interests under one roof. Politicians also demanded an organization for the short film which was independent of particular interests, as a competent contact for upcoming amendments to the film funding law and other issues. In short, everything seemed difficult, barricades everywhere, and no one really felt like spending the scarce time to found a short film association. In addition, there was the difficult question of financing such a representation, because no one really wanted to spend money on it. At the federal level, it was argued that short film belonged to the field of culture and was therefore a matter for the federal states. At the state level, Juana Bienenfeld, film officer at the Hamburg Department of Culture, and Theda Kluth from the State Chancellery in North Rhine-Westphalia dealt with the issue in a benevolently diplomatic manner and pulled the strings on the film policy level that finally led to the founding of AG Kurzfilm in May 2002. Sylke Gottlebe, who had just given up her position as director of the Filmfest Dresden, was recruited for the management. The brilliant idea for the appointment came from Karsten Hinckeldeyn, a founding member and long-time director of the Hamburg Short Film Agency, who should not go unmentioned here, as he also conducted many important preparatory talks in the background and presided over the founding event on May 5, 2002 as part of the Oberhausen Short Film Festival.

The team around Sylke Gottlebe and Jutta Wille took up the work full of optimism and zest for action. Other important members were recruited for the association, since then they have been successfully taking care of presenting of German short films at important film events abroad, they are contributing to the amendments to the Film Funding Law in regard to short film, and they are a competent contact for all questions concerning short films from Germany.

Great work! I sincerely wish AG Kurzfilm the very best for its 20th birthday. Continue to have many, many exciting short film discoveries and enriching encounters with filmmakers!!!!

Astrid Kühl
Founding and Board Mamber of AG Kurzfilm until 2008